Toasting my school socks on an old asbestos panel heater was a ritual in my house when I was growing up.

Every winter morning, just after the sun crept up, my brother and I would huddle in front of the heater, shovelling spoonfuls of Jungle Oats into our mouths. With one eye on the morning cartoon on SABC, we would strategically place our socks over the white heated panel to get them “super-toastie” before pulling them over our frozen feet and lacing up our Toughees.

Toasting school socks – I wonder if that’s even a thing anymore. Well, minus the asbestos heater of course, which clearly isn’t.

Back on those icy Highveld mornings, my real job was to boil a kettle of water and carry it out into the street so my father could run it over the windscreen of our battle-weary VW bakkie. The water couldn’t be too hot because that would result in a cracked windscreen (made that mistake once).

If the water was too tepid, it only compounded the problem and you ended up with a dirty, sludgy windscreen. When the temperature was just right (and I had it down with several years of practise), the ice would slowly melt away, and that gave us the all clear to bundle into the frigid cockpit for phase two of our morning mission.

You see, even on a balmy summer’s morning, the car that was “made for the people” never ever started with one turn of the ignition key. It might have for all the “other people”, but not our family. We had a carefully constructed dance that we had to do with our VW every morning.

In the middle of June, with morning temperatures around zero, seven was the average number of attempts it took before the car took a breath and give my old man the signal to throttle the choke and gently push the accelerator. Roughly two minutes later (if the engine didn’t die on us) the handbrake dropped and the “Volla” lurched forward into the street, to sounds of joyous rapture and high fives.

“She’s alive!” my old man would bellow as he floored it in a futile attempt to beat the morning rush hour.

And that’s how it was, morning after morning, year after year.

We took hundreds of wintery school trips that started the exact same way every morning, and every time I see current school goers, huddled up at bus shelters or on street corners waiting for the carpool pick up, it reminds me of a time in my life that’s long gone, but not completely forgotten.

It’s mid-year school vacation season and that means some respite from wintery early morning school runs 🙂 That’s what got me reminiscing about my mornings, to begin with.

Kids are wrapped up in duvets, sleeping in late, while moms and dads have bought themselves an extra 45-minutes in the morning to hit the gym, stop off for a coffee or fire up the laptop and get a few emails out of the way. The strange thing is that it feels like the other day it was ‘back to school’ time and 2019 was just kicking off. Now it’s beanie and scarf weather and that represents yet another half of a year that has just flown by.

What happened to February, March, April and May?

It’s fascinating to me that for thousands of school goers this will be the last time they put on a winter uniform. Well, not exactly the last time for everyone, but some kids are off to high school next year to sport new uniforms and meet new friends, and others will be hanging up uniforms for good as they head off to varsity or college.

20 school terms or approximately 1000 school days – that’s all that separates a child starting high school and finishing their Matric exams.

5 winters and 20 school terms before morning chats about high school crushes and rugby tournaments turn into more serious chats about, “What am I going to do for the rest of my life?”

When that question comes up, as a parent, you need to be ready for two things:

The conversation itself – but that’s not the biggie and something you can cope with, because you’ve been there and done that.

The money chat is one that’s going to be a lot tougher if you haven’t been making provisions.

You see, one morning your kids are toasting school socks on a heater and the next morning they are asking you to come up with R400 000 to study medicine.

In the blink of an eye your 6-year old becomes an 18-year old, because hours turn into days, days turn into weeks, the months roll on, and the years tick by.

If you haven’t started making provisions for your child’s future education needs, what are you waiting for?

Every morning that you get into your car to do a school run, is another day that’s gone past.

Imagine you had a counter running from 1000 to 0. After every high school morning run, you get to tick off another day. The sense that you are running out of time would be overwhelming, wouldn’t it?

Well, we can’t provide you with a counter that you can stick to the dashboard of your car, but we can start with providing you with a link to the Old Mutual Education Calculator.

Step 1: Click on this link and the calculator will open for you 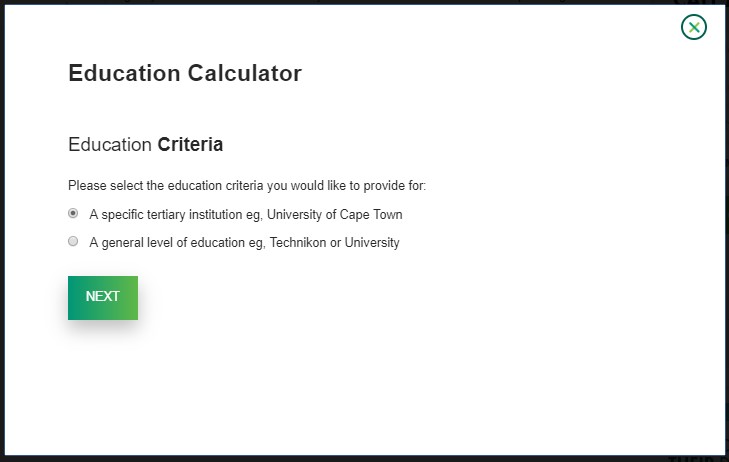 Step 2: Select the education criteria you would like to provide for:

Step 3: Now enter your specific goal details: we used the example of a teenager, Alex, who will be going off to study a 3-year BCom Accounting degree at University, in 5 years’ time when he finishes school. 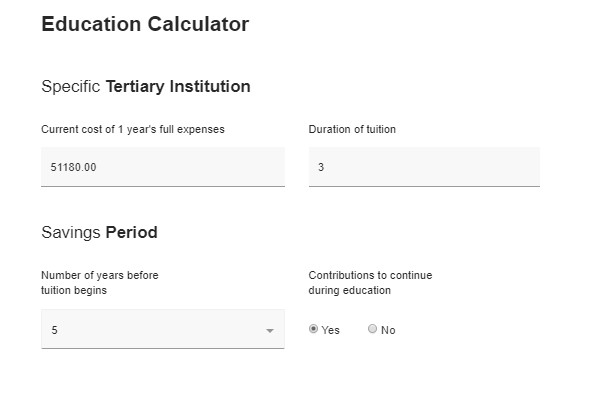 This section is broken down into 3 steps:

Existing Savings Towards Tuition – This allows you to add in your existing accumulated capital savings (Alex’s parents haven’t accumulated any other savings for his tuition at this point). As you can see in the below screenshot, there will be an annual increase in contributions of 9% and there is an expected annual growth of the savings of 8%. It is also expected that the annual education costs will escalate by 9%.

The results page then provides you with an estimated future education costs calculation which is worked backwards to give you an estimated monthly contribution you need to make.

As per our example, it will cost an estimated R258 139.80 to send Alex to University, to do a 3-year BCom Accounts degree, in 5 years’ time. We also added to the calculation that Alex’s parents would continue their monthly contributions while he is studying. As per the calculation, Alex’s parents would need to put R1456.46 away each month in one of Old Mutual’s education savings solutions, starting when Alex enters high school next year. That will get them to the desired amount in order to send their son to university in 2025.

*These calculations were recorded on the 1st July 2019. 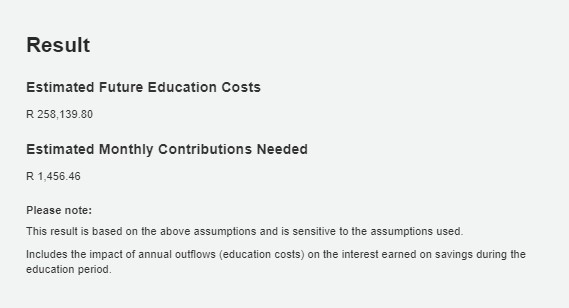 Step 5 – Get In Touch With an Old Mutual Financial Adviser

The last step is to get in touch with an Old Mutual Financial Adviser via the Call Back form. Leave your details for a call back and find out which of their education planning products are available to you. From flexible payment options to tax efficient solutions, Old Mutual’s educational savings solution has everything you need to help you start saving for a gift that will last a lifetime. 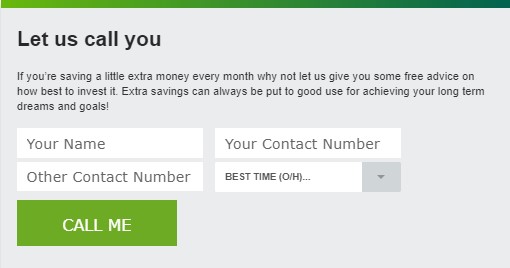 Toasted school socks might turn into dreams of starting an online designer sock empire, and how awful are you going to feel if you made 1000 school drop-offs and didn’t have the foresight to think about your kid’s future education needs.

Click on the banner below & test the calculator out!