Is your business owed a ton of money? 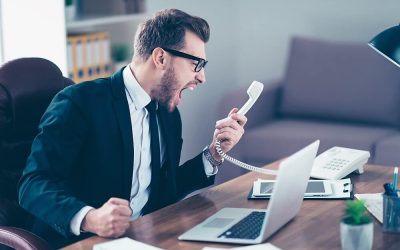 Paul recognizes the number displayed on his phone.

Paul had been expecting this call for a while now. In fact, over the past month, he’d received a call from them every week. He’d run out of excuses and he knew deep down that the end had come!

Paul speaking, hello…
Hi Paul, Frans here. How are you doing?
I’m okay thanks Frans, and you?
Great Paul. Listen I’m calling about your overdraft facility. Last week you said you’d make a deposit the latest this week. Nothing reflects?
Frans, I was meaning to call. I need another week. You know how it is with big clients, they take their time paying. I was promised by next week…
Listen, Paul, this isn’t personal. You’ve been a loyal client over the past ten years, but we’re going to have to call in your overdraft facility. I’m sorry to have to do this,

But Frans, that will kill my business!

So, what exactly was the problem Paul found himself having?

Paul would be the first one to admit that he was a small fish in a big pond. In the beginning, business was easy. He invoiced his clients and they paid cash. As his business grew, Paul started to attract a bunch of loyal clients. Heck, they’d even braai together over the weekends, that sort of thing.

Over time his most loyal clients asked if they could run a tab and settle what they owed at the end of the month. Paul didn’t have a problem with this since they were mates, right?

You would never guess what happened next.

Business took off. Soon, some of his steady mates started referring to some big business his way. And when we say ‘big business’ we mean large companies and government entities. Here was a chance to build a massively successful business and Paul jumped at the opportunity.

There was only one small (at the time) problem with all this new business.
They also wanted to run a 30-day account. Now, this usually wasn’t a problem, but these guys were ordering hundreds of thousands of Rands worth of stock at a time. Paul just didn’t have that kind of money, and so he applied for an overdraft at his bank.

This was the reason for Frans’s call. He wanted his money – all of it!

Depressed and out of options, Paul could literally see his life unraveling before him. What would he say to Judith? The short-term solution was to go and drown his sorrows, and so off to the pub he headed.

He didn’t know it then, but that trip to the pub saved his business…

This guy offered to buy all the money owed to Paul
At the pub, Paul sits down next to some guy with the name Jim. Jim asks Paul what line of business he’s in, and before you know it, Paul has spilled all the beans – from losing his business to possibly losing his marriage.
Jim pats him on the back and says he can help.

Paul, I can help you. Here’s the deal, I will pay you cash for all the invoices where you’re owed money. Those invoices then become mine. But I’m only willing to buy them if you sell them to me at a 20% discount. What do you think of that idea?
Are you for real, Jim?
Yeah, of course, I am!
Man, you’re a lifesaver. Can you give me a day or two to discuss it with my wife?
No problem Paul, here’s my card.

Of course, Judith saw the problem with this
That night Paul sat down with Judith and played open cards.

Judie, I need your advice. Can you come and sit?
Sure honey, what’s going on?
The bank has recalled the business overdraft, and I don’t have the money to repay it. We could lose the business.
But we’re only talking about R100, 000. What’s their problem?
Over the past couple of months, I’ve had to increase it. We now owe them somewhere closer to R300, 000.
What???
Judith, I had to do it. The customers aren’t paying, and I’ve got close to R500, 000 worth of invoices outstanding over 90 days. But I’ve got a solution.
You do?
Yip. I met a guy by the name of Jim who’s willing to buy up all the invoices if I give him a 20% discount. He will pay us, like in tomorrow, if I give him the go-ahead.
There’s only one problem with that Paul…
What?
You aren’t going to have any customers left once Jim starts squeezing them for payment.
I never thought of that. What now?
Don’t worry, I have a solution.

Judith was about to introduce Paul to a guy called Mike from a company called Bridgement.

Paul needed to save his overdraft if it already wasn’t too late. At the very least he’d need to make a substantial repayment.

• Basically, you connect your accounting software to their online website. This allows them to import all your invoices into their system
• Then Bridgement decides which of those invoices is acceptable for an advance
• You can then view those invoices and select which of those you want paid. It’s as simple as clicking the “Get Paid” button.
• Bridgement then adds an advance clearing fee which, as soon as you accept, pays the advance to you
• You can then pay the advance back over 12 weekly debit orders or sooner if you request early settlement without cancellation penalties.
• Your customers are never contacted by Bridgement
• You collect the money from your client
• Even small invoices are accepted
• You only pay as you use the service

How much could it cost?

Bridgement charges a single simple fee per amount that they advance to you. There are no catches or hidden fees.

If your business isn’t a cash business then you know the frustrations of having to chase after debtors for payment. Some of them will even tell you straight out, “sue me”.

Of course, you could always sell your credit book to a factoring company, but then you’d probably lose more than one customer that way.

But if you know your customer is good for the credit, that they’re just going through a rough patch, then someone like Bridgement could well have the answer you need.